Learn everything you need to know about our NPS Page.

Written by Alican
Updated over a week ago

It is located right above the Net Promoter Score Box on the NPS Page.
Status Field shows whether the NPS survey will be shown to your users or not.
There are two statuses: Inactive and active.

Your Net Promoter Score is calculated by subtracting the percentage of customers who are detractors from the percentage who are promoters, which can range from a low of -100 to a high of 100.

Total view count is increased when a user sees the nps survey.

In a period (which is the number you set to define how many days later the user will see the survey again), a single user can only increase total view count by one.

It is total responses over total view.

It shows how many qualitative(written) feedback you gathered.

If you disable feedback question from nps settings page, the number will always be zero. 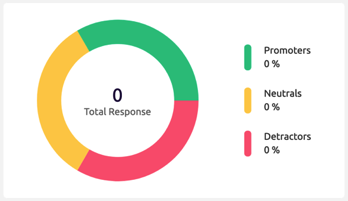 The percentage of users who have given you 9 or 10 in the survey.

The percentage of users who have given you 7 or 8 in the survey.

The percentage of users who have given less than 7.

Did this answer your question?